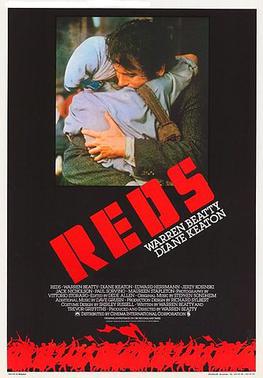 Early in the film Reds, a witness asks if John Reed and Louise Bryant were socialists. “They must’ve been, but I don’t think they were of any importance. I don’t remember them at all.” The irony here being that John and Louise were monumentally important, but tragically they are hardly remembered except for those who care to know about them. Who were John and Louise Bryant? If Marx wrote that the specter of Communism was haunting Europe, and if the Bolsheviks were the ones who succeeded in turning that vision into a reality, then John and Louise were nothing less than the heralds of the new era: the epoch long transition from Capitalism to Communism. John Reed and Louise Bryant were the ones who emerged and let the whole world know that Communism was no pipe dream that would never see the light of day, but that it was very real and that the specter was now on the doorstep of the whole world.

Louise is the first character to be properly introduced to us in the film. She has an appreciation for photography that is far ahead of its time and is not afraid of social mores about womanhood. Though it is not mentioned in the film, Louise Bryant was also a suffragette. She is driven and unafraid of opinions about herself or her activities.

Next to be introduced is John Reed. While attending a liberal club he is asked what he thinks World War 1 is actually about. Though hesitating, he says without trepidation the one and only correct answer: “Profits.”

Louise Bryant’s eyes light up, as eager to interview him as we are to hear what he has to say. She leads him to her apartment where she fires off round after round of questions with the tempo of a machine gun. It is impossible to keep up with her question before she is even finished asking it. It is a testament to her knowledge and her drive as a person that she could bravely ask such questions, and it is equally herculean seeing John Reed keep up with her questions and answering them plainly. The only thing that can seemingly stop them is the sunrise and the realization that they have other appointments.

From then on it is understood that these two people won’t be able to leave each other even if they want to. Yes, they can and will be separated when it comes to their clashing interests and careers, but they can’t escape each other’s minds.

One of the first excursions John takes away from Louise is to a secret meeting by the IWW. While there, “Big” Bill Haywood tries to lure in new members by promising them a brighter future.

“And for that we need power. And there’s only one way to get power, organize! All the workers together. One big union. And the war the IWW wants you to get into is class war, not a war in Europe. War against the capitalists. You’ll never get anywhere until the whole working class belongs to one big union.”

This serves as an example of where revolutionary thought was at before the Russian Revolution. Revolution had never been done before and no Socialist country had ever been developed. People had competing theories for how to accomplish it. Some believed in the power of the unions and the general strike, while some subscribed to democratic reformism, while revolution seemed like the least desirable option. Of course, the limitations of this thought are soon made plain when the police arrive to disassemble the gathering. Just as the democratic process discourages and expels revolutionary figures from entering it, the police, serving as the strongman of Capital, destroys union organizing even when they are within their legal rights.

The other leading force besides the IWW, The Socialist Party, takes a nebulous stance against the war, and in its current state does very little to combat it. John harasses them for more information, but he is rebuffed, saying that he isn’t a party member so he doesn’t have credentials. John becomes convinced that he needs to join the Socialist Party, if for no other reason than to be able to ask these questions.

Finally, he and Louise embark to Russia. While still on the train they meet a 14-year-old boy, surrounded by wounded soldiers, who has just joined the Bolsheviks in order to stop the war. Everywhere our protagonists turn, the situation is dire. As if to contrast his prior meeting with the Socialist Party, when John shows up at a Bolshevik rally, he is hesitant to speak, worrying that he doesn’t have credentials to speak, but he is told, “Credentials?! What credentials? Everyone has credentials here.” The Socialist party will not allow critique or commentary from non-party members while Bolsheviks will.

When John returns home and publishes “10 Days that Shook the World”, we learn that despite his moving statements to the Russian workers, that the radical left faction of the Socialist party is purged and The Socialist Party does not intend to follow the Bolsheviks. Comically, the first thing the radical faction does is fight amongst themselves over whether to form a new party or to demand that they be reinstated into the socialist party, continuing a long tradition of fractured communist/labor movements. When John Reed and his allies do arrive to demand their reinstatement, they are even derogatorily called “Bolshevik sympathizers” which is especially rich because up to this point the Bolsheviks were the only ones to successfully seize state power and start a socialist country. “The police are coming.” The speaker tells the crowd. The same police that thwarted a working class gathering earlier in the film which John himself is eager to point out. Ultimately, they are unable to resolve the contradiction between the socialist party and the two radical factions, and so two competing communist parties are formed, one of American born workers and one of ethnic minorities.

“You’re not a politician, you’re a writer. And your writing has done more for this revolution than twenty years of infighting can do and you know it.” This was said by Louise, and I think there is some truth to it.

When John returns to Russia he’s told that both communist parties must merge, hampering his dream of fostering the American Communist revolution. John can’t plan a revolution, despite promising to be back home by Christmas, he completely fails to take into account the blockade of the country by counter-revolutionary white army forces. Of course, when he tries to return home, he gets caught and imprisoned, only released because of the allies he made in the Soviet government. What he has in passion and determination he lacks in his foresight.

John Reed is a dedicated socialist, but his ideals don’t always align with the Bolsheviks. He fraternizes with the anarchist Emma Goldman whose anti-authoritarian ideology prevents her from seeing that communism is not something that can be established overnight and a period of authority must remain in order to quell the counter-revolutionary white army. They see the need for revolution, but don’t understand that revolution is an inherently authoritarian act, and that without the dictatorship of the proletariat, it will collapse. At first John is supportive of the government, but he too is not accustomed to the structure or organization of a government or a vanguard, and soon becomes beleaguered. This comes to a head when his speeches are altered, and he complains that they are purging dissent, only for counter-revolutionaries to ambush them and remind us what real dissent is for them. The establishing of the Socialist state was the first step, but the path to Communism is a long and prolonged struggle.

You can tell that the writer/director/actor/producer Warren Beatty identifies with John’s controlling attitude of his writing just by the amount of credits he gave to himself. He meticulously shot several scenes, even up to a hundred takes, and drove his crew wild. John Lithgow was considered by Warren Beatty for the lead role of John Reed for a short time. This was because Lithgow physically resembled Reed. Beatty eventually decided that he would play the part of Reed. In one instance, after explaining the context of the film to a group of extras, they came to Beatty after their lunch and had decided to unionize after deciding that they felt exploited.

The running theme of the film, both on and off the screen is one of idealism vs pragmatism. The Socialist Party yearned to achieve their goals through electoral methods, but shunned the methodology which actually got it done. John wants to help create and guide a revolution and simultaneously he wants to raise a family, but this dream goes to shambles because he doesn’t realize what the reality is for revolutionaries. It is revealed that the life of a revolutionary is a life of work and sacrifice, where some are forced to abandon their families. When he has no hope of returning to Louise, John chafes at the style of leadership because they are still in a period of war and are unable to allow dissent, which he sees as dehumanizing. In making the film about a socialist revolutionary Warren Beatty exploited the people on his set far beyond the point of necessity. Stringent adherence to your ideals, no matter the circumstances, is a recipe for failure. Marxists are pragmatic and know when to compromise in order to achieve the best results with the limitations that are beset upon them.