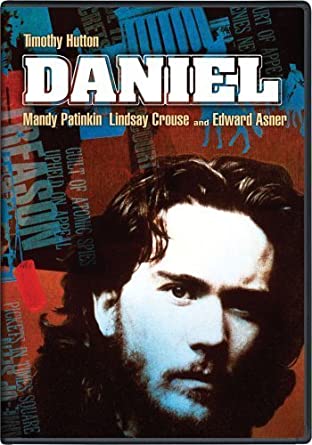 “Daniel” by director Sidney Lumet is a film about the children of a Communist couple accused of spying for the Soviet Union during the Cold War. The children, Daniel (played by Timothy Hutton) and Susan (played by Amanda Plummer), wander from family to family after their parents, Paul Issakson (played by Mandy Potemkin) and Rochelle (Lindsay Crouse), are dedicated Commnist Party members who portray Julius and Ethel Rosenberg. The Rosenbergs were wrongly executed for passing on atomic secrets in June 1953. Their children, Michael and Robert, were left orphaned and moved from home to home during most of their childhood.

Lumet’s cinematic rendition of E.L. Doctorow’s “The Book of Daniel” is a film about Daniel Isackson’s quest for the truth of their parent’s imprisonment and their subsequent execution by electrocution. Like a current of electricity, the film begins with a riveting closeup of Daniel’s face as he recites factual information regarding the world’s two leading producers of electricity, the United States and the Soviet Union. The tone of the film is set: a war between two giants fought in the living rooms and homes of ordinary people. The camera slowly pans back and reveals a sharp, gritty and bearded face of the film’s protagonist engaged in a soliloquy of some very modern facts that any audience of today can relate to: electricity. As Daniel’s soliloquy ends, we are transported into a bright dining room on Thanksgiving Day as Daniel and sister Susan argue politics of the day: America’s involvement in VietNam and the student-led anti-war movement.

The execution of the Issaksons leaves an indelible and deep trauma on Daniel and Susan as they try to find answers to the events that devastated their lives. Lumet is masterful in his use of emotional tension and deep despair between the two siblings at the Thanksgiving dinner table which serves as a battleground between the two now grown-up children. Susan desperately tries to connect with the memories of her parents by throwing herself into radical student movements and causes, and relishes in showing off her battle-scars as proof of her commitment to the cause of the day. Amanda Plummer uses her high-pitched and shrill voice to maximum effect as she accentuates the anger and despair of trying to find justice in causes outside of herself. Daniel, on the other hand, immerses himself in his newly-formed family and his graduate work which is interrupted by the growing clamor of the student protest movement broiling in the background.

Daniel is a casualty of the capitalist system. Daniel and Susan both are the result of the dissolution of the family as their parents are hounded down after serving their country during World War 2; faithfully returning home to raise a family like any other American family. What ensues is Daniel’s recollection of his early childhood replete with summer camp outings in the lodges of the Communist Party in the Catskill mountains. Happy memories no different from those of other American children. Lumet recreates these scenes from actual events as the number of Communist Party members were in their thousands where speeches and seminars were common as members listened attentively to Marxist subjects and perspectives from the Party. To many Americans, especially those with right-wing loyalties or affinities, scenes such as these frightened them as it was proof that communists, often portrayed in many right-wing magazines as deceptive agents of universal evil, only made them cringe at the thought that communists were peaceful Americans who enjoyed the pleasantries of life just as much as they did. Times were good, for some, but they were short-lived as McCarthyism reared its ugly head pitting American against American. The Cold War raged not only abroad but at home as well and it was evidently brutal sparing no one.

Overall, Daniel is about the destruction of not only a family dedicated to building socialism through the Communist Party in America but more so about the destruction of families by capitalism and the political system that supports it in the United States. Industrialization has left plenty of evidence how it not only spurred on population growth but that it indirectly splits up families. Two of the western world’s leading intellectuals (William Blake and Friedrich Engels) wrote about the dissolution of the family as the basic unit of any society destroyed by the insidious effects of capitalism. The Romantic poet William Blake chronicled this phenomenon in many poems composed during the industrial revolution in the British Isles in the latter part of the 19th century. Blake frequently made poetic references to parentless children. Engels analyzed the slow destruction of the family in economic terms in his “The Origin of the Family, Private Property and the State.” Lumet continues this narrative through Daniel as he chronicles the slow dissolution of the Issaksons. Although Lumet does something different but unknowingly; he gives his audience an inside view of the breakup of an American family, a family who took part in the fight against fascism both at home and abroad. A family no different from any other American family, the only difference being their political ideals which made them the scapegoats in a state-sponsored reign of terror targeting an American family.