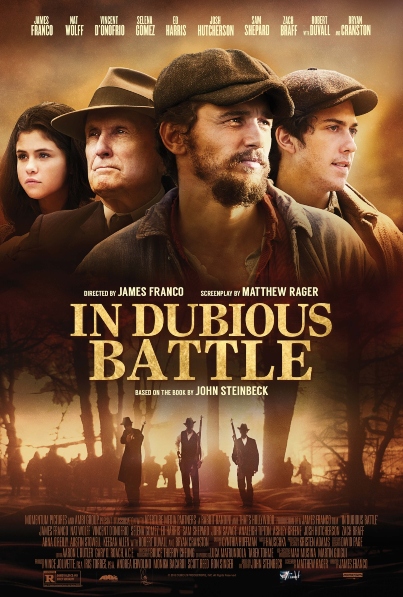 In Dubious Battle (2016) A Film Review by Joseph Malinov

Cast: James Franco, Nat Wolff, Vincent D’Onofrio, Robert Duvall, Selena Gomez, Ed Harris, Bryan Cranston Director: James Franco Abstract: James Franco and Nat Wolff star in this working class tale loosely based on the 1936 John Steinbeck novel about two Communist Party members who join a group of exploited Great Depression era apple pickers in 1933 California. These two labor rights activists hope to guide the apple picker’s angst toward a successful strike that creates a local wage increase, a freeze on future wage cuts in other areas, and a level of class consciousness that could create the conditions for the overthrow of the existing economic mode of production.

Recently, I had an opportunity to watch In Dubious Battle, an extremely relevant movie considering the increase in the number of labor and organizational struggles within the United States during the last few years. The movie impacted me positively and I was driven to read the original John Steinbeck novel from which this film was based upon and I decided to write a review of the film. Within this review, I will touch upon the movie’s positive aspects while pointing out its shortcomings.

The two lead characters, Mac and Jim, first make acquaintance in a dimly lit, rundown regional “party” office in front of a banner reading “We’ve Just Begun to Fight.” This introduction sets the film’s scrappy tone and is a harbinger of battles to come. Without a pause, the train hopping activists are on their way to organize a large group of angry apple pickers in Northern California. While sitting in an open boxcar travelling the forest-lined rails, Mac, the senior party member states:

“What made you want to join a bunch of radicals? Did you know the Industrial Workers of the World, violent anarchists, and dirty communists?”

“I had all this inside me but I never had anywhere to put it. I just fought, but now I have a chance to fight for something.”

In Dubious Battle takes every opportunity to appeal to those who have an eye, or ear for proletarian politics. However, the producers of the film play the role of liberal centrist by, in typical corporate media style, demonizing communist organizers while managing to maintain their sympathy for the working class movement. The contradiction is evident. This film excellently represents the exploitative, deceptive, and often times violent practices of capitalists who appear to be gentle, civilized people until their profits are threatened. Unfortunately, bourgeois propaganda shows its face by reshaping the form of Steinbeck’s pro-communist character development in that the experienced fighter for the working class is portrayed in the film as a belligerent, cheater, who lacks self control and is willing to harm his fellow workers for the cause of a future revolution.

“What matters is we got these guys working together…you got to take every opportunity that you get. And we gotta remember what the stakes are. We’re tryin’ to change things for millions of people. Anyone who has to take a shit deal because the boss says so; anyone who doesn’t own something; that’s who we’re fightin’ for.”

This movie clearly shows examples of tactics and strategy, with regard to bringing about and sustaining an agricultural strike. At the same time, insight is given into the methods capitalists have employed to break strikes. These methods include bringing in replacement workers, spying, intimidation, media propaganda, beatings, shootings, and forcing starvation by cutting off supplies. Of course, not every tactic portrayed can be applied to 21st century US conditions, but the general antagonistic nature of capital vs labor is exemplified within this film and this nature can be eye-opening for those who know little about the labor movement.

While watching In Dubious Battle, in spite of its failures to portray communist labor movement heroes in a positive light, the film accurately emphasized the importance of the 1930’s labor battles in such a way that I could feel the desire to fight for existing and future worker’s rights growing in my mind. This emphasis was assisted by a professional group of actors who never failed to project the mood of the difficult and “dubious” experience they were trying to portray. Special attention was given to the production of the final few minutes of the film, where the radical folk music classic “Which Side are You On” created a backdrop for a brief historical lesson on strike numbers and what concessions were created to quell these labor battles. These brave fights were a major part of the reason why workers in the US today have a forty hour work week, overtime pay, a federal minimum wage, and the right to unionize. However, make no mistake, these concessions are being rolled back in some areas of the US and will continue to be rolled back unless workers create and maintain a drive to fight for their rights. To be clear, our battle does not stop at concessions. Until the working people all over the world own the means of production, we must continue this battle. If you need additional inspiration beyond your daily alienating experience within the capitalist system or are looking for educational entertainment, I would suggest watching In Dubious Battle.

“People think they want wealth or power, but that ain’t it. People just want to know their lives matter…that they matter. Having some control over your own life – it’s worth fighting for. No matter the cost.”

Links for farm worker health and safety, and organizing: