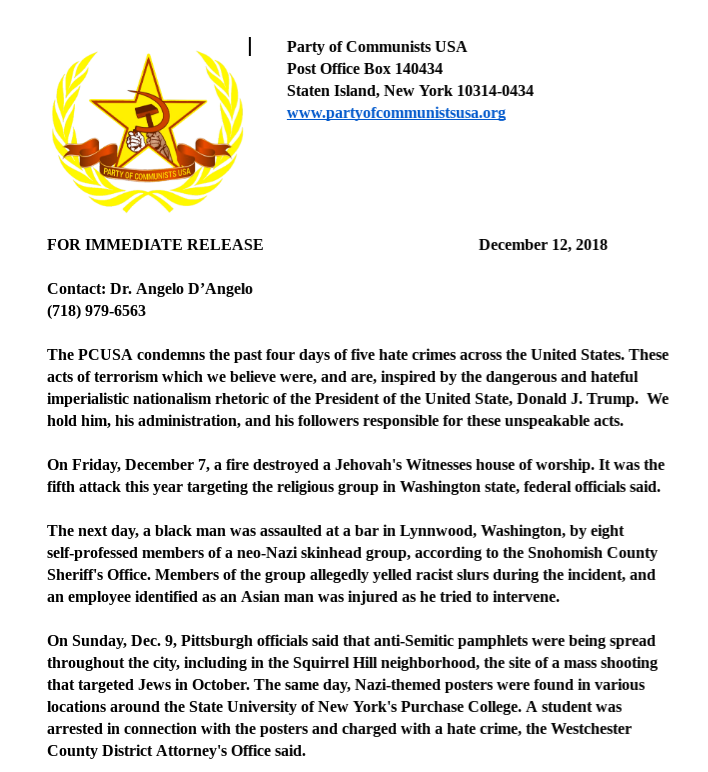 The PCUSA condemns the past four days of five hate crimes across the United States. These acts of terrorism which we believe were, and are, inspired by the dangerous and hateful imperialistic nationalism rhetoric of the President of the United State, Donald J. Trump.  We hold him, his administration, and his followers responsible for these unspeakable acts.

On Friday, December 7, a fire destroyed a Jehovah's Witnesses house of worship. It was the fifth attack this year targeting the religious group in Washington state, federal officials said.

The next day, a black man was assaulted at a bar in Lynnwood, Washington, by eight self-professed members of a neo-Nazi skinhead group, according to the Snohomish County Sheriff's Office. Members of the group allegedly yelled racist slurs during the incident, and an employee identified as an Asian man was injured as he tried to intervene.

On Sunday, Dec. 9, Pittsburgh officials said that anti-Semitic pamphlets were being spread throughout the city, including in the Squirrel Hill neighborhood, the site of a mass shooting that targeted Jews in October. The same day, Nazi-themed posters were found in various locations around the State University of New York's Purchase College. A student was arrested in connection with the posters and charged with a hate crime, the Westchester County District Attorney's Office said.

On Monday, Dec. 10, a 21-year-old man was arrested for allegedly plotting to kill worshipers in a Jewish synagogue in Toledo, officials said.

The recent headlines reflect a broader trend, according to civil rights groups. There's been a rise in reports of such incidents over the past three years, they say -- a trend that is also borne out by federal data.

We say NO MORE! The violence must end. The racism must end. The religious bigotry must end. The hatred must end. We encourage all democratically minded people to come out in solidarity with the victims. Stop the massacres and the right-wing death squads now! Crooked Trump and his goons must be stopped!  #CrookedTrump